William is regularly sought after as a lecturer, clinician and performer throughout the United States and Brazil, including the Blue Lake Music Camp in Blue Lake, MI, the Bay View Music Festival in Bay View, MI, the Third Coast Trombone Retreat in Montague, MI, and the Festival Nacional de Musica in Goiania, Brazil, in addition to several universities across the United States.

William is currently the Second Trombone with the Atlanta Ballet, the Des Moines Symphony, and the Columbus Symphony (GA) Orchestras. His orchestral experiences also include performances with the Atlanta, Chattanooga, Lexington Philharmonic, Ohio Valley, West Virginia, Quad-City, Missouri, Tuscaloosa, Meridian, Victoria and Waco Symphony Orchestras. He has also performed with the Austin Lyric Opera, as well as the Victoria Bach, Texas Music and Hot Springs Music Festivals, and the 49th Armored Division Band. His jazz experience includes performing with the Di Martino Osland Jazz Orchestra (DOJO) and the Waco Jazz Orchestra, among others.

William received his Doctor of Musical Arts and Master of Music degrees in trombone performance from the University of Texas at Austin in addition to a Bachelor of Music Education from Baylor University. 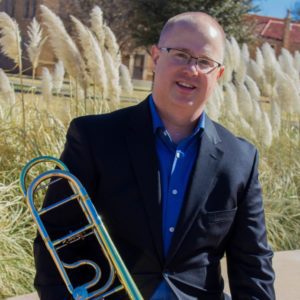