Dwight Coleman is professor of voice and director of external relations for the School of Music at Georgia State University in Atlanta.  He is also the executive/stage director of the nationally recognized Harrower Summer Opera Workshop. He holds degrees from Surry Community College, the University of North Carolina at Greensboro and Northwestern University with additional study in Italy and Austria.

Mr. Coleman has performed leading and secondary baritone roles with the Atlanta Opera, Pensacola Opera, New Orleans Opera, Teatro di Verdi in Italy, Skylite Opera, Shreveport Opera, Mississippi Opera, North Carolina Symphony, Bellingham Festival and Milwaukee Symphony. His roles include: Sharpless in Madama Butterfly; Dr. Falke in Die Fledermaus; Silvio in I Pagliacci; Valentin in Faust; Germont in la traviata; Enrico in Lucia di Lammermoor; Ping in Turandot; Peter in Hansel and Gretel; Ford in Falstaff; Pizarro in Fidelio and others. He made his Carnegie Hall debut as baritone soloist in Ein deutsches Requiem by Brahms and was featured at Lincoln Center’s Avery Fischer Hall as baritone soloist in Five Mystical Songs by Vaughan Williams. Other performances include “Chansons madécasses” by Ravel with Musica da Camera in Atlanta; “Eight Songs” on text by Walt Whitman by Ned Rorem and “I remember long ago” from the Great Gatbsy by John Harbison, with the composers in attendance; Elijah and Carmina Burana with the Pensacola Symphony and Choral Society; premier performances of “Waltzing through the Endtime” with the Atlanta Chamber Players, acclaimed as one of the top three classical performances in Atlanta, 2005; and Beethoven’s Ninth Symphony with the Columbus Symphony Orchestra. In 2008 he premiered “First Rain” by Nick Demos with the Aris Piano Quartet at the Dimitira International Festival in Greece and in 2010 premiered Demos’ “An Empty Blouse,” which was released on compact disc in 2013 by Albany Records.

As a recitalist, Derrick Henry, critic for the Atlanta Journal Constitution, stated: “He grabbed one’s attention immediately with his imposing, resonate voice and his theatrical manner. What made his recital special was the ability to make a listener identify with the texts’ protagonists, to feel their joys and sorrows.”

His awards include: Regional Finalist in the Metropolitan Opera Auditions in Chicago; Shreveport Opera Singer of the Year; Finalist in the Bel Canto Foundation competition in Italian Opera; winner of the National Opera Association’s Opera Production Competition for his production of Mentotti’s The Saint of Bleecker Street; winner of the Pro Mozart Society competition to study at the Mozarteum in Salzburg, Austria with Grace Bumbry and Kerstin Meyer; and a Bel Canto grant to study in Busseto, Italy with Carlo Bergonzi and Renata Tebaldi.  At Georgia State University, he received the 2000 Torch of Peace Award for promotion of racial harmony, the 2005 Sparks Award for dedication to service and the 2007 College of Arts and Science Outstanding Teacher Award. He served as director of the School of Music at Georgia State University from 2007 – 2013.  He was awarded the Loridan’s Foundation Arts Medal in 2009 for his contributions to the arts in Atlanta.  He is on the advisory board of the Rialto Center for the Arts, is President of the Opera Guild for Atlanta, has served as Vice President of the National Opera Association and President of the Georgia Chapter of the National Association of Teachers of Singing. 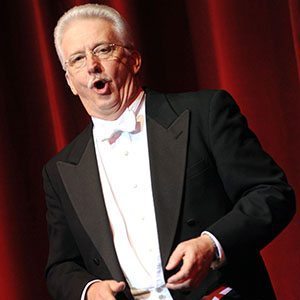