Mrs. Kruser Ambrose is an extremely active performer. She currently performs with the Cobb Symphony, Macon Symphony and Ocmulgee Symphony Orchestras and is a founding member of the Georgia Chamber Winds, an Atlanta-based professional wind dectet. In addition, she has performed with the Milwaukee, Carrollton and Augusta Opera Orchestras and is an active freelance musician in the Atlanta area. Mrs. Kruser Ambrose is in great demand in the metro-Atlanta area as a masterclass clinician and sectional coach. Her playing can be heard on the Summit recording label. She made her Carnegie Hall debut as a soloist on Gustav Holst’s Fugal Concerto in May 2005. Highlights for this season include appearances at the Percussive Arts Society and International Double Reed Society Conventions, a performance at the Dimitria Music Festival in Thessaloniki, Greece and an invitation to solo with the Ocmulgee Symphony Orchestra.

Mrs. Kruser Ambrose is a strong advocate for the creation and performance of new music and is a core member of the avant-garde music ensemble Bent Frequency. Hailed by Gramophone Magazine as “one of the brightest ensembles on the [Atlanta] scene” and by the Atlanta Journal Constitution as “a suddenly indispensable part of the Atlanta music scene,” the ensemble has received widespread critical acclaim for their musical virtuosity and innovative programming.

Mrs. Kruser Ambrose has given several world premieres. Of particular note are two pieces written for and dedicated to her, Jonathan Newman’s Concertino for Flute and Chamber Winds (2008) and Nickitas J. Demos’s Tonoi VI (2006) for solo flute. 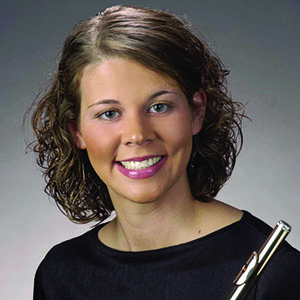