Eric Bubacz has an extensive career as a soloist, chamber musician and orchestral performer. He studied for three years at the Eastman School of Music in Rochester, NY before transferring to the Curtis Institute of Music in Philadelphia, where he completed his Bachelor of Music. While in school, Eric was a member two different brass quintets, both of which competed and placed second at the New York Brass Conference Quintet Competition. During the summers, he attended several noted festivals including the National Repertory Orchestra, Rencontres Musicales d’Evian, Sully Music Festival, Centre d’Arts Orford, Harmony Ridge Brass Seminar, Festival of Art and Musical Excellence and Schleswig-Holstein Music Festival, where he was the first tubaist to win the Chamber Music Prize. Shortly after graduating from Curtis, he attended the Colonial Euphonium and Tuba Institute where he won second prize at the International Tuba Solo Competition. He also placed first on tuba in the International Women’s Brass Conference Solo Competition.

As an orchestral player, Eric has been named principal tuba of the Haddonfield Symphony (1992-1997), the Canton Symphony (1998-2006) and the Reading Symphony (1996-present). He has also performed as an extra musician with the Philadelphia Orchestra, Cleveland Orchestra and the Cleveland Blossom Festival Band. In 1997, Eric began working as an extra with the Pittsburgh Symphony Orchestra. By 2000, Eric was also playing with the Pittsburgh Symphony Brass and can be heard on several of their recordings, including Cantate Hodie – Sing Forth this Day and The Spirit of Christmas. From 2002-2005, Eric regularly acted as principal tuba of the Pittsburgh Symphony Orchestra. Highlights of his work with them include four European tours, three performances at Carnegie Hall and a performance at the Vatican for Pope John Paul II.

Since moving to Atlanta in the 2006, Eric has become an active teacher and performer throughout the Southeast. 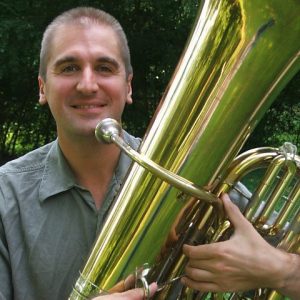