Miaomiao Wang has performed as a soloist and collaborative artist throughout the United States of America and China. She was praised as a child prodigy on local newspapers and television when she was three years old, when she displayed unusual talents in language, poetry and music. Her first CD as a collaborative pianist, Lotus Out of Water, was recorded and released by China Record Corporation in 2004. Dr. Wang is a recipient of the Charlotte Cohen Milman Endowed Scholarship. Winner of 1st and 2nd Guo, Ren Yuan foundation musicianship competition. Winner of 1st hope cup piano competition in Beijing. Winner of piano division in 1st Gan Su province music festival in Jin Chang.

Dr. Wang launched her career in opera as the head coach of the Beijing Opera Culture and Art Center in the 2005 season. Since then, she has served as an assistant coach in the Peabody Institute of The Johns Hopkins University, New England Conservatory and Boston University Opera Institute. She was invited by the San Francisco Opera Center’s Merola Young Artist Program in 2009. She was a faculty member of several opera summer programs including Opera in the Ozarks and Spotlight on Opera. Her particular interest in promoting opera for children and community also lead her to be invited as a teaching artist by the Boston Lyric Opera and Wheelock Family theatre education program. Dr. Wang served as assistant music director at the University of North Texas opera department where she coached main stage productions and served as a chorus master in 2017. Dr. Wang also worked with Dallas Opera in preparation of Don Carlo and Pulcinella/La voix humaine in 2019/2020 season.

A native of China, Dr. Wang was a sought-after collaborative pianist long before she graduated from her alma mater, Central Conservatory of Music in Beijing, where she was hired as a staff pianist for the voice and opera department on the third year of her piano performance study. Since she moved to the U.S. she has served as a studio pianist for Phyllis Bryn-Julson, Karen Holvik, Vinson Cole, William Sharp among many others; and performed on the masterclasses of Jane Eaglen, Roger Vignoles, Steven Blier and Sherrill Milnes. Dr. Wang has also collaborated with opera stage directors such as Garnett Bruce and Tomer Zvulun.

As a chamber musician and instrumental collaborative pianist, Dr. Wang has performed in Carnegie Hall, Madsen Recital Hall, Hemmle Recital Hall and War Memorial Opera House. Dr. Wang taught collaborative piano masterclasses in Utah Valley University as well as Northwest Minzu University in China. Dr. Wang is passionate about promoting new music, she performed the world premiere of the opera Yellow Wallpaper in 2008 with Peabody Chamber Opera, she collaborated with Jake Heggie on his opera Three Decembers and performed it with Boston University Opera Institute. She was an artist-in-residence of Eschler Music Foundation, collaborated with composer Samuel Adler and other chamber musicians and composers, performed on the Salty Cricket Composers Collective concert series in Raleigh and Salt Lake City. She also worked with composer Tom Cipullo and performed with North Texas University chamber orchestra on his complete operas.

Dr. Wang received her Doctor of Musical Arts from Boston University (DMA, ’17), Graduate Diploma from New England Conservatory, and Master of Music from Peabody Institute of The Johns Hopkins University (MM, ’08). Among the teachers she studied with are Eileen Cornett, John Moriarty, Warren Jones, and one of the most legendary Chinese pianist and educator Zhou, Guang Ren. 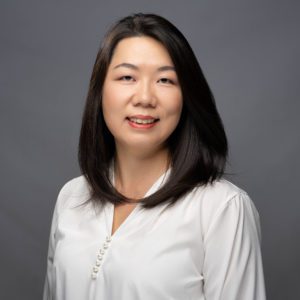