Classical guitarist Luther Enloe possesses a distinctively resonant sound quality, lyrical phrasing, and technical finesse. An active recitalist, recording artist and clinician, Dr. Enloe has recorded for Sonic Grapefruit Records and has appeared in the southeastern and northwestern United States. Recent solo recital engagements include performances at the University of Alaska, Anchorage; Fickling Hall, in Macon, GA; Ramsey Concert Hall in Athens, GA; Frost Chapel in Mount Berry, GA; the Susan B. Harris Chapel in Young Harris, GA; Hoag Auditorium in Dahlonega, GA; Max Noah Recital Hall in Milledgeville, GA; John C. Campbell Folk School in Brasstown, NC; the Ursuline Centre in Great Falls, MT; and the Emerson Center for Arts and Culture in Bozeman, MT. He has appeared as a guitar soloist and chamber musician with numerous ensembles, including Joaquin Rodrigo’sConcierto de Aranjuez with the Atlanta Philharmonic Orchestra, the U.S. premier of Enjott Schneider’s oratorio Klange des Lichts in collaboration with the Vega String Quartet and the Glenn Chancel Choir at Emory University; as well as performances with the Montana State University Chorale, the Dekalb Choral Guild and the Peachtree Symphonic Winds.

In 2011, he earned the Doctor of Musical Arts degree from the University of Georgia under the guidance of John Sutherland and David Starkweather. His dissertation,The Technique and Artistry of Melodic Phrasing in the Spanish Classical Guitar Tradition, elucidates 400 years of melodic aesthetics and techniques found in the writings and music of Spain’s most prominent guitar composers.

In addition to serving on the faculty of Georgia State University, Dr. Enloe is instructor of guitar at Berry College in Rome, GA and artist affiliate in guitar at Emory University.  In 2010, he was an advisor in the development of performance standards for middle and high school guitar classes for the Georgia Department of Education and Georgia Music Educators Association. In 2012, he was appointed the first guitar chair for the Georgia Music Educators Association. He lives in Lawrenceville, GA with his wife, Victoria, and their son, Cole. 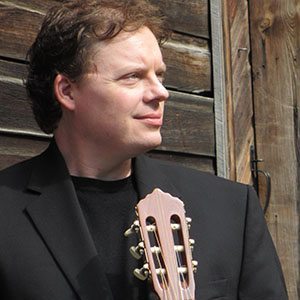