T. Devin Reid is currently an active musician and educator throughout the southeast. A native of Fayetteville, NC, Mr. Reid is a 2005 recipient of the North Carolina Teaching Fellows Scholarship. He holds a Master of Music in Wind Band Conducting from Georgia State University and a Bachelor of Music in Music Education from the University of North Carolina at Greensboro.

In 2018 Mr. Reid accepted the position as Assistant Director of Bands at Georgia State University in Atlanta, GA. Prior to this, Mr. Reid served as the interim assistant director of bands for two years. In this capacity he co-teaches the Panther Marching Band, conducts the Basketball Band, conducts the University Concert Band, teaches undergraduate and graduate level conducting courses, and supervises student teachers in the field among other duties and courses. Since his arrival, the GSU Concert Band has grown to become the largest instrumental concert ensemble at the university. With Mr. Reid’s direction, the GSU Panther Band performed in 2019 as part of the Pepsi Super Bowl LIII Halftime Show, been accepted as a CBDNA Southern Region top marching band in 2020, and been accepted to perform in the 2022 Tournament of Roses Parade. Preceding to his appointment at Georgia State, Mr. Reid taught public school in Georgia and North Carolina and served as Graduate Assistant for the Georgia State University Bands. While teaching at James Kenan High School (NC), Mr. Reid grew the program from 0% to 10% of the school population in just three years. His ensembles performed at numerous events in and out of the community including the NC Muscadine Festival, NC PAS Day of Percussion and the Virginia International Music Festival.

As a performer, Mr. Reid is an actively sought-after musician. He was the percussionist for the popular brass quintet and Delos recording artist “Da Capo Brass”. Their debut album “From The Beginning” stormed the iTunes classical charts at #8 in January 2012. He has also been a member of the regionally acclaimed bluegrass band, “T.R. and the Boys” as baritone vocalist and mandolin player. They have three releases, and their most recent album; “Lonesome” features one of his original songs as the title track. He is a member of the National Association for Music Education, College Band Directors National Association and is an endorser for Sabian Cymbals.

Mr. Reid is happily married to his beautiful wife Amy and they reside in Powder Springs, GA with their daughter Katelynn and son Ethan. 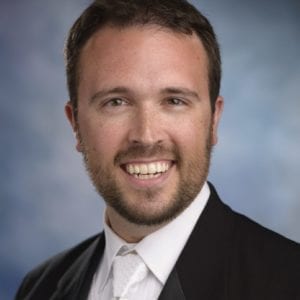