Coordinator of Ensembles and Conducting

Dr. Deanna Joseph is Professor of Music and Director of Choral Activities at the Georgia State University School of Music where she conducts the University Singers and leads the master’s program in choral conducting. In 2015, she was the recipient of the College of Arts and Sciences’ Outstanding Teacher Award at Georgia State, where she was selected out of a pool of over 800 faculty.   A recent review of her work states, “[t]he choir sings with great musicality, excellent intonation, clear diction, and a healthy and beautiful pallet of tone colors…” (The Choral Scholar).

In May of 2017, the University Singers under Dr. Joseph’s leadership won first place in the renowned Marktoberdorf International Chamber Choir Competition while on a concert tour of Austria and Bavaria.  In May of 2013, the University Singers competed in La Florilège Vocal de Tours where the choir placed second overall in the mixed choir category and Dr. Joseph was honored with the Prix du chef de choer (conducting prize).  The Georgia State University Singers have been invited to perform at two Southern Division conventions of the American Choral Directors Association and at two conventions of the Georgia Music Educator’s Association during Dr. Joseph’s tenure at GSU, and the Georgia State University Choirs have been hired to sing two productions of David Bintley’s Carmina Burana with the Atlanta Ballet: in 2013 (North American premiere performances) and 2017. The choir’s professional recording, Evening Hymn (Gothic Records), is distributed internationally by Naxos and is available for purchase or streaming on all the major music distribution outlets including Amazon, Spotify, iTunes, etc.  The American Record Guide review states “There are no runts in the repertory litter…[and] [t]he Georgia State choir of 40 is very good at all of it: radiant as dusk approaches, but hushed and sensitive to the coming darkness as shadows deepen and fall.” The disk has been featured several times on National Public Radio’s program, With Heart and Voice.

Dr. Joseph is an active guest conductor and headline clinician and has conducted all-state and honor choirs in more than twelve states. She is a frequent conductor of choral-orchestral repertoire and has led performances of Mendelssohn’s Elijah, Beethoven Mass in C, Mozart’s Requiem, Haydn’s Creation and Lord Nelson Mass, Schubert’s Mass in A-flat and Bruckner’s Mass in D Minor.  She has prepared choirs to sing with the Atlanta Symphony Orchestra, the Atlanta Opera, and Andrea Bocelli. One of her small ensembles was featured on a 2016 episode of “The Walking Dead”.

Dr. Joseph’s research in the area of 19th-century choral-orchestral performance-practice has led to invited presentations on the topic at several division conferences of the American Choral Director’s Association and at the national convention for the National Collegiate Choral Organization. In October of 2012, she was selected as one of 25 presenters from ten countries to speak at the Lund Choral Festival in Sweden.

Prior to her appointment at Georgia State University, Dr. Joseph served on the faculties at Smith College, the University of Massachusetts at Amherst and Hobart and William Smith Colleges.

Dr. Joseph holds conducting degrees from the Eastman School of Music, where she was awarded the Walter Hagen Conducting Prize.  She is the founder and artistic director of the Atlanta Summer Conducting Institute (ASCI), a weeklong, summer conducting master class that draws conductors from across the country. 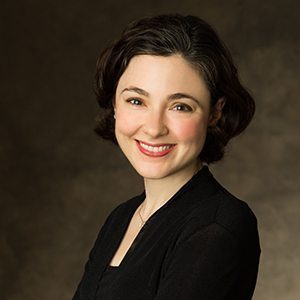