Coordinator of Chamber Music in Strings

Hailed by many music critics as “A genuine old school virtuoso,” “an incredible mixture of dazzling virtuosity and immaculate musicianship,” “an artist of rare originality and utmost integrity.” Greek-Armenian violinist Christos Galileas has enjoyed an active international career as a concert violinist, chamber musician, and teacher in over forty countries worldwide.

Highlighted appearances include the performance of the Brahms Double Concerto with Mischa Maisky and conductor Andris Nelsons. Chausson Concerto for violin, piano, and string quartet with the Borodin Quartet. Beethoven Triple Concerto with the Berlin Symphony Orchestra. He has appeared as a soloist at some of the world’s most prestigious concert venues such as the Kennedy Center (Washington D.C.), Carnegie Hall (New York), Musikverein and Konzerthaus (Vienna), Gasteig and Hercules Hall (Munich), Smetana Hall and Rudolfinum (Prague), Athenaeum (Bucharest), Athens and Thessaloniki Megaron and others.

Born in Thessaloniki, Greece, he took his first violin lessons at the age of four from his father, Kosmas Galileas, the distinguished Greek violinist and conductor, and continued studying with Professor Stelios Kafantaris.

He was awarded first prize and the gold medal for his outstanding musical abilities upon graduating from the Conservatory of Athens in 1994. At age sixteen, his first public appearance was with the Symphony Orchestra of Thessaloniki, with an impressive Paganini violin concerto no1.

From 1994 to 1995, he studied with Zachar Bron in Lubeck, Germany. He continued his education at the Oberlin Conservatory, where he was accepted in the studio of renowned Professors Roland and Almita Vamos and received the Dean’s Talent Award and B.M. degree.

In 1995 he won the first prize at the National Competition for Scholarships of Greece, and two years later, he was awarded the Alexandra Triandi scholarship of the Megaron of Athens.

He has also appeared as soloist with the Philharmonic Orchestra of the Music Academy of Vienna and the Camerata Orchestra of Megaron of Athens to open the International Festival in Patra.

In 1997, Christos Galileas won the first prize at the Greek National Competition for violin, held by the Cultural Association TECHNI, in collaboration with the State Orchestra of Thessaloniki and the Cultural Capital of Europe Thessaloniki 1997.

Of particular significance was his collaboration with acclaimed pianist Dimitri Sgouros.

In 1999 he continued his studies at the Juilliard School with the legendary violin pedagogue Dorothy Delay and received the Master’s degree.

In March 2001, he had the honor of receiving the first prize at the Kate Neal Kinley Memorial fellowship competition at the University of Illinois. In 2002, he founded the Hellenic Camerata, a chamber orchestra with 22 members. He had an extensive tour in North, Central, and South America in many countries such as the USA, El-Salvador, Guatemala, Costa Rica, Uruguay, and gave more than 35 concerts in 7 weeks.

In December 2005, he received his Doctorate Degree in Violin Performance (Doctor of Musical Arts) from the State University of New York at Stony Brook.

In 2007 Christos Galileas joined the faculty at Georgia State University, where he currently serves as Associate Professor of Violin and Coordinator of Chamber Music. He served as Coordinator of the String Area from 2007-2014. His latest research is focused on commissioning and recording the music of women composers from Greece and Armenia.

In 2015 Dr. Galileas founded the Anatolia Summer Music Program in Thessaloniki Greece, where he also serves as Executive and Artistic Director, www.musicanatoliacollege.com.

Dr. Galileas’ recordings can be found on the Albany Records label. He plays on a 1705 Joseph Guarneri violin. 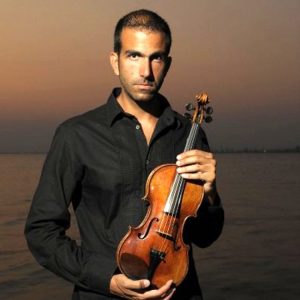