Atlanta based Saxophonist, Composer, and Educator Chris Otts has been active in the Atlanta music scene since moving to the area in 2010. Otts is currently Artist Affiliate in Jazz Saxophone at Georgia State University. In addition to his teaching, Otts is an award-winning performer, composer, and arranger for many groups of varying styles. Most recently Otts was recognized for the compositions on his debut album Layers for which he was recognized as a BMI Future Jazz Master.

As a performer Otts has been able to share the stage and collaborate with incredible jazz artists including Wycliffe Gordon, Eric Reed, Jim Snidero, Scotty Barnhart, Paquito D’Rivera, and Kenny Werner. Otts is well versed in all styles of music and has worked with several pop and rock bands including performing with Blood Sweat and Tears and recording with The Whigs album release “Live in Little Five”.

Otts is in demand as a composer and arranger. His original compositions have been performed in venues across the U.S. and several have received consistent radio play around the world including Europe.

Otts remains an active performer, educator, and composer throughout the Southeast. To hear music, view upcoming show dates, or any other inquiries visit Otts’s website at 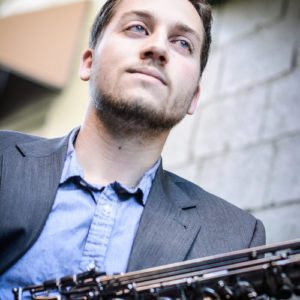