Atlanta-based saxophonist, Brandyn Taylor, is the saxophone instructor for the Atlanta Music Academy, and the Principal Saxophonist of the 116th United States Army Band. In addition to mentoring a thriving private studio of students from across the metropolitan region, he is an Artist Affiliate of saxophone at Reinhardt University, Georgia State University, and is in demand as a clinician throughout the state.

He has performed with the Atlanta Symphony Orchestra, Atlanta Ballet, Columbus Symphony Orchestra, Atlanta Saxophone Quartet, Bent Frequency, Terminus Ensemble, and Chamber Cartel. Since 2012, he has been an active jazz and commercial recording artist in the Atlanta area, having been featured on singer-songwriter Ellis Paul’s most recent album, “Chasing Beauty,” as well as several commercial recordings with Brandon Bush of the band Sugarland. He made his Nashville recording debut in the summer of 2014 with the band RYE. Former students have been awarded top prizes/chairs in competitions across the state of Georgia and earned full-ride scholarships to study music at prestigious universities. 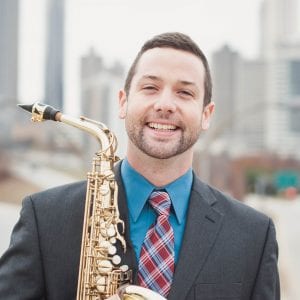